A place full of history 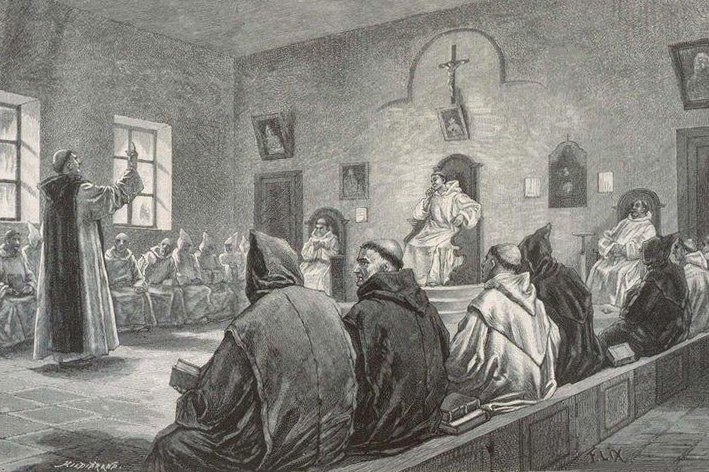 For more than nine centuries, the Œlenberg Abbey, the only survivor of the many men’s monasteries that once existed in the country, has maintained the great monastic tradition in Alsace. Situated on one of the last hills of the Sundgau, 15 km west of Mulhouse, the abbey has shared the joys and misfortunes of this region.

In 1046, Heilwige de Dabo, Countess of Eguisheim and mother of Pope Leo IX, founded a priory of Canons Regular of Saint Augustine on the hill (Berg), along a stream (Oelen), probably for the repose of the soul of her son Gérard, who had died tragically during a quarrel with the Count of Ribeaupierre. Leo IX consecrated the church in 1049 and deposited the relics of Saint Romain, a martyr, there. Very prosperous in the 13th century, the monastery was ruined by wars in the 14th century. Its decline continued until the 16th century. In 1626, the abbey passed to the Jesuit college of Freiburg

im Breisgau, then to the university of the same city in 1774. During the Revolution, the abbey buildings were sold to an industrialist from Mulhouse. In 1821, the former monastery was sold to a priest and became a boarding school for young girls.

In 1825 it was returned to the hands of a large group of Cistercian monks, commonly called “Trappists”, who had returned from exile. They came from Darfeld, Westphalia, where they had found temporary refuge after many wanderings. A community of Trappist sisters joined them and remained there until 1895, when they moved to Ergersheim, not far from Strasbourg (Abbey of Our Lady of Altbronn); from there they moved much later to Bernardvillé (since 2009: Abbey of Our Lady of Baumgarten 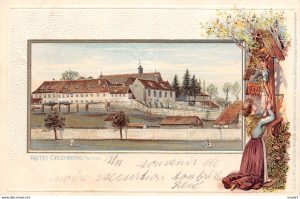 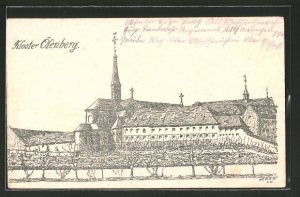 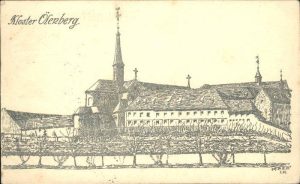 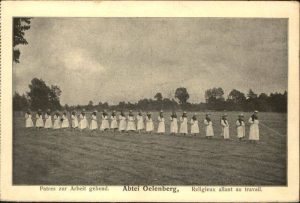 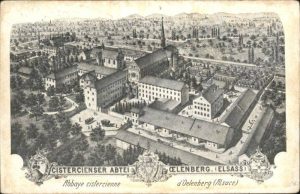 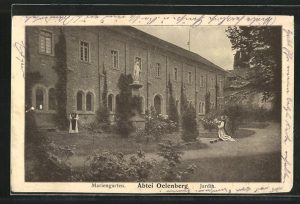 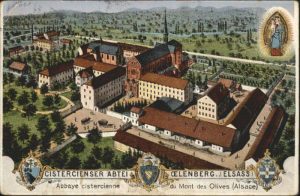 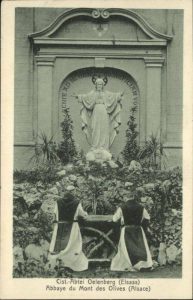 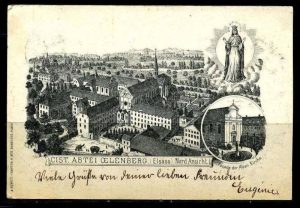 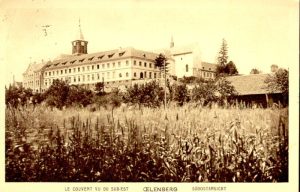 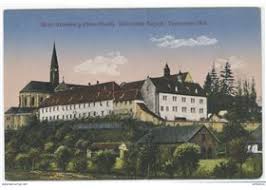 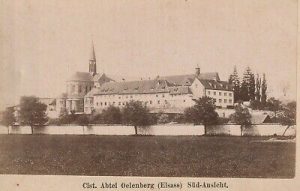 The monks put the agricultural estate into operation. They experienced difficult times: famine in 1846, fires, epidemics. However, the prosperity of the monastery grew. Intense activity reigned there. In addition to the farm and the mill, there was a brewery, a cheese factory, a bakery, a printing house; almost every trade was represented. Dom Ephrem Van der Meulen, abbot from 1850 to 1884, built up a rich library. Œlenberg founded a monastery in Germany, in the diocese of Aachen in 1862: Mariawald

, near Heimbach. At the beginning of the 20th century, the abbey had 200 monks: 80 priests and 120 lay brothers. Œlenberg was then a very famous religious, intellectual and economic centre.

The First World War was to destroy all this development: the buildings were bombed and the monks had to disperse. The reconstruction was difficult. In 1925, a group of monks of German origin settled in Austria, at Our Lady of Engelszell

, between Passau and Linz, on the banks of the Danube. They revived this former secularised Cistercian abbey. Œlenberg was destroyed for a second time in 1944-45, just as badly as the previous one. The diocese of Strasbourg and its faithful contributed generously to the reconstruction, while monks from Zundert (Netherlands) came to support the severely tested community, which regained life and hope. A new stage was then opened. 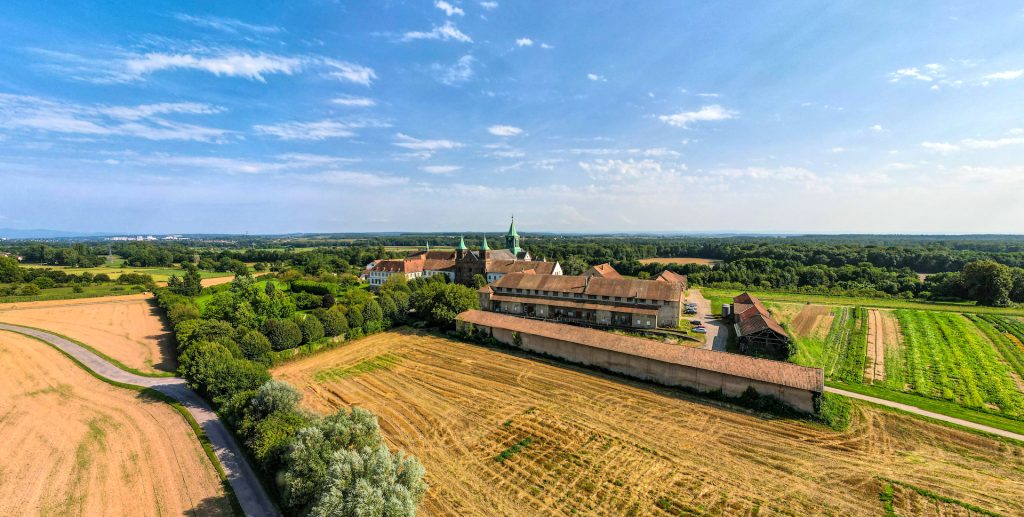 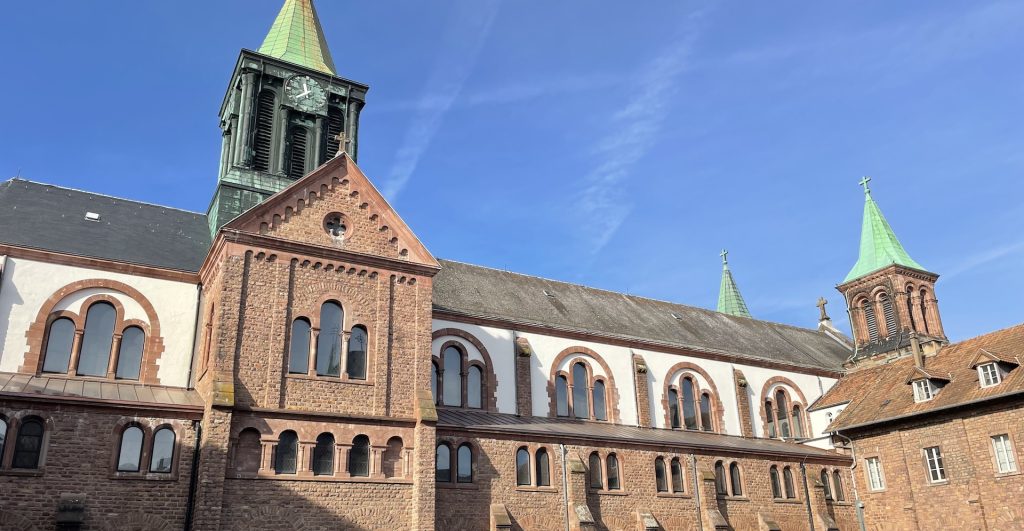 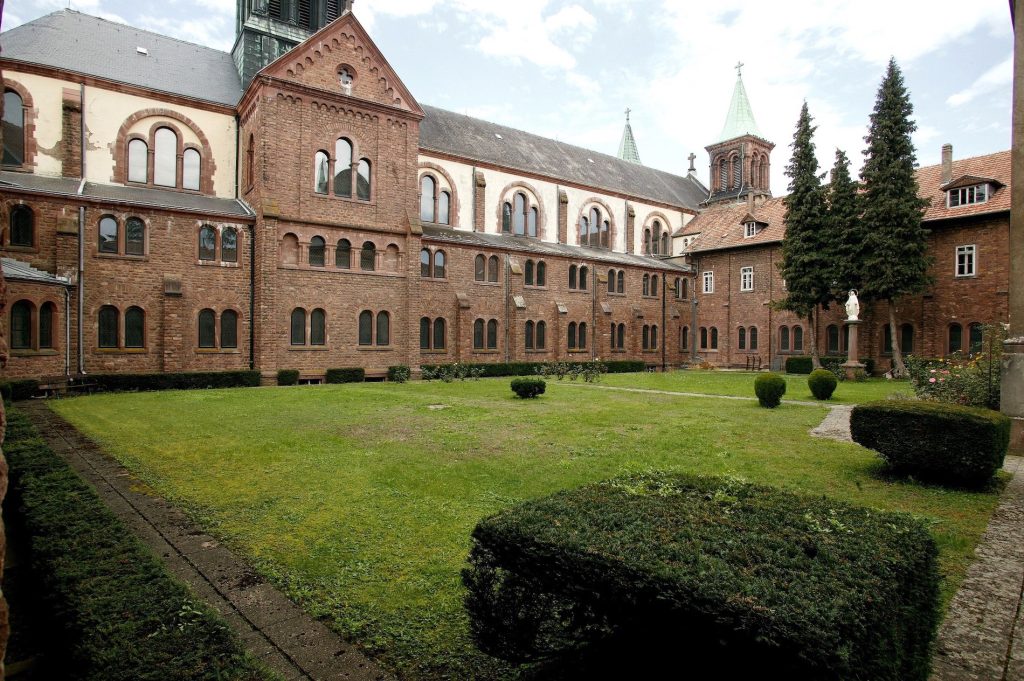 From a heritage and artistic point of view

Of the buildings of the past, only a few parts remain: the lower part of the choir of the 12th century chapel, the transept of the former abbey church (1486) and its baroque nave (1755). A 12th century processional cross, a large 14th century crucifix and two beautiful 15th and 18th century statues of Our Lady are also preserved. In the former Jesuit church, the chapels of St. Michael and St. Leo have been built.

The chapel of Saint Michael has Gothic vaults and Romanesque openings. Three keystones are preserved with coats of arms dating from 1486. The chapel of Saint Léon has parts of the 12th century in its chevet. Palmettes capitals can be seen there. One of them represents two heads separated by a cross and designated by the letters S.P.A. and S.P.E. (Saint Paul and Saint Peter).

Another chapel called “of the Mount of Olives” was an isolated building in the 12th century. Later, it was included in the other buildings and served as a cellar until 1895. At that time, it was dismantled stone by stone and rebuilt in the present novitiate in 1921. Its lower parts are Romanesque; the keystones are Gothic. In the Chapter, an 18th century painting, recently restored, is displayed, representing the scene of “the lactation of Saint Bernard”. It comes, along with three other reliquaries from the same period, from the Cistercian Abbey of Lucelle which disappeared during the Revolution.

Three reliquaries from Œlenberg are also in the parish church of Reiningue. The oldest, a gift from Pope Leo IX, is a silver box, partly gilded. It dates from the 11th century. It contains relics of Saint Romain. Another reliquary, known as the Reliquary of St. Roman, is a 12th century work. It contains relics of Saint Romain, Saint Laurent and other saints. Finally, a 14th century reliquary bust of St. Roman contains a relic of the skull of the saint.

Nowadays, the monastery has an important library of more than one hundred thousand books.

Between difficulties and projects

Our house is large and the outbuildings are numerous. For the past five years, we have been engaged in indispensable and urgent renovations and adaptations to improve our living environment and make it more in line with today’s needs and standards: renovation of the guesthouse and kitchen, rearrangement of the community areas, modernisation of the mill, renovation of the septic tanks… We are continuing our reflection in search of solutions, especially with regard to the parts of the buildings classified by the Monuments Historiques. One day, perhaps it will be possible for us to open to the public some of the historical and cultural “treasures” of our monastery.